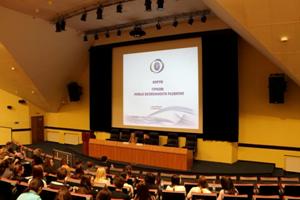 Hotel Cronwell Resort Ugorskaya Dolina from 3 to 5 December hosted the All-Russian Forum "Tourism: New Opportunities for Development" organized by the Department of natural resources and non-oil economy sector of Khanty-Mansiysk Autonomous Area – Ugra, supported by the Ministry of Culture of the Russian Federation, Federal Agency of Tourism and the Russian tourism industry union. Hotel complex became one of the host-places for the meeting, and tourist company "Ugra Intur Service" was the operator of the forum.

In total, the event was attended by over 150 delegates, including: S.M.Polukeev - deputy governor of Khanty-Mansiysk Autonomous Area – Ugra, I.M. Lartseva - First Deputy Governor of the Department of Physical Culture, Sports and Tourism of the Tambov region, E.V. Lysenkova - «Hospitality Income Consulting» CEO, expert in hotel and restaurant business (Moscow), A.S. Linker - Director of MBI “Office of Tourism Development and External Relations” in Khanty-Mansiysk, Advisor to the Khanty-Mansiysk Head of Administration and others.

Participants of the forum discussed problems and prospects of domestic and inbound tourism development in the Russian Federation and presented tourism projects of Russian regions. The event was attended by executive authorities of the Khanty-Mansiysk Autonomous Area - Ugra, Yamal-Nenets Autonomous Area, Sverdlovsk, Tyumen, Chelyabinsk, Leningrad, Vologda and other regions from all over Russia.

The second day of the forum was most intense for Cronwell Resort Ugorskaya Dolina. In the "Atrium" building throughout the day the exhibition of souvenirs and handicrafts "City of Masters" took place. In presentation sections speakers talked about the projects devoted to health, recreational and event tourism. One of them was Irina Nitz - chief physician of the sanatorium "Ugorskaya Dolina". Irina’s work was devoted to the new sanatorium and SPA services, which are represented in the Wellness Hotel since October 2014.

Forum showed interest of the authorities at all levels and business community in tourism development, including regions. Its results confirmed that domestic and inbound tourism in the Russian Federation is now entering a new phase in its development.