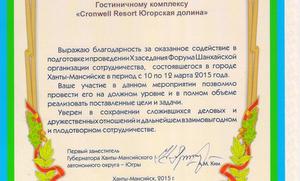 March in Ugra was rich in international events. The beginning of spring was marked with the opening of the 10th anniversary session of the Shanghai Cooperation Organization (SCO) forum in Khanty-Mansiysk. The event was attended by national delegations and representatives of diplomatic and expert circles of Member States, observer states and dialogue partners of the SCO, as well as other interested countries. About 60 experts from 13 countries came to the capital of the Khanty-Mansiysk Autonomous Area - Ugra.

Hotel Cronwell Resort Ugra Valley committed itself to host representatives from China, India, Kyrgyzstan, Turkey and other countries that are members of the Shanghai Cooperation Organization delegation. The hotel helped to prepare and hold the 10th meeting of the SCO Forum at the proper level, and fully implement goals and tasks.

Natalia Komarova, Acting Governor of the Khanty-Mansiysk Autonomous Area – Ugra, took place at the session opening. She spoke about the future of the region for interaction with the SCO countries, and these plans are quite ambitious.

Creative activities of the sanatorium guests

Khanty-Mansiysk – the best city in the world!

© Cronwell Hotels&Resorts, 2009–2022
Official website
mobile version Design and development – Travelline
We use cookies to improve the way you interact with our website. By continuing to view this page, you are agreeing to use cookies. Learn more about our "Cookies Policy".
We use marketing cookies if you have given permission for this. If you do not give permission, advertisements will still be shown, but these are random advertisements. You can make your choice below.