Let’s remember the "Spirit of Fire" 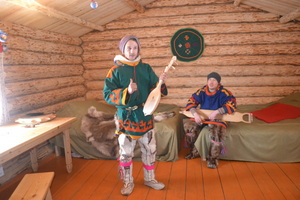 XIII International Festival of Film Debuts "Spirit of Fire" is over. The most important cultural event was traditionally held in Khanty-Mansiysk and lasted from 21 to 26 February 2015. This year's festival was dedicated to the 70th anniversary of Victory in the Great Patriotic War.

Cultural program with excursions was organized for all participants and members of the jury of the festival. The program included: city tour, when guests learned about the history of the city, saw main attractions, such as, "Archeopark", biathlon center, the temple complex "In the name of the Resurrection of Christ," the central square with "Rotonda" fountain and much more .

The most active participants of the festival visited the ski resort "Coniferous Urman," where they could go skiing, snowboarding, tubing and appreciate the beauty and greatness of Ugra nature.

Acquaintance with the national culture has become a tradition for participants of the festival "Spirit of Fire". This time, participants and members of the jury became guests of the "Ethno-camp "Siberia Park ", located near the hotel Cronwell Park Dobrino, where they could meet with old and unique culture and traditions of Khanty people and taste national cuisine.

Cronwell for health of the nation